What are Nicotine Salts?
Are they Better than Freebase Nicotine?

Nicotine salts have been around for a while, they’re known for being less abrasive, yet more appealing. However, as popular as they are, there are still many vapers are still unsure what they actually are. So what are nicotine salt e-liquids? How are they different from freebase nicotine ejuices? Are nicotine salts safe and worth trying out? Read on to find out more!

What are Nicotine Salts?

First of all, Nicotine Salt (commonly abbreviated to nic salt) IS NOT salt and they definitely doesn’t taste salty. Nicotine salt is the purest and simplest form of nicotine that is found in tobacco leaves which comes in a salt-like composition. Unmodified nicotine salts that could be added to the PG/VG that makes up e-liquid, would need to be vaped at extremely high temperatures for the nicotine to become effective. Hence to make it most effective for vaping, nic salts still need a touch of chemical tweaking themselves, the key here is Benzoic Acid.

The breakthrough came to Pax Labs when they were developing the Juul. By adding benzoic acid, the nicotine salts were able to be vaporized at lower temperatures, and this also reduced the pH of the nicotine. Benzoic acid makes nic salt easy to absorb in the lungs and will actually make the nicotine much smoother for an easy and enjoyable hit. Unlike freebase e-liquid, nic salt vape juice contains extra compounds which provide a sensation much closer to smoking, in addition to a more consistent hit of nicotine to satisfy the craving quicker than regular vape juice.

What are Freebase Nicotine?

To understand what nicsalt is, let’s compare it to the big brother – Freebase Nicotine.

Freebase Nicotine is the purest form of nicotine. Freebase has been the norm in cigarettes for decades, thanks to Phillip Morris of Marlboro back in the 1960s. He found that “freebasing” nicotine-paired with ammonia delivered a significantly larger amount of nicotine, which did wonders for keeping customers hooked. It absorbs much faster in your lungs and brain when heated. This is why you will usually see it in a much lower milligram or percentage in e-liquids such as 3mg (or 0.3%).

This freebase nicotine ejuice solution is simply added to a mixture of vegetable glycerin (VG) and propylene glycol (PG) which carry the nicotine with them when vaped. Due to this it creates a strong hit which can feel a bit too strong at super high nicotine strengths or for first time vapers.

It may not seem it but there are a lot of ways these two differ, here is a breakdown of what you need to know: 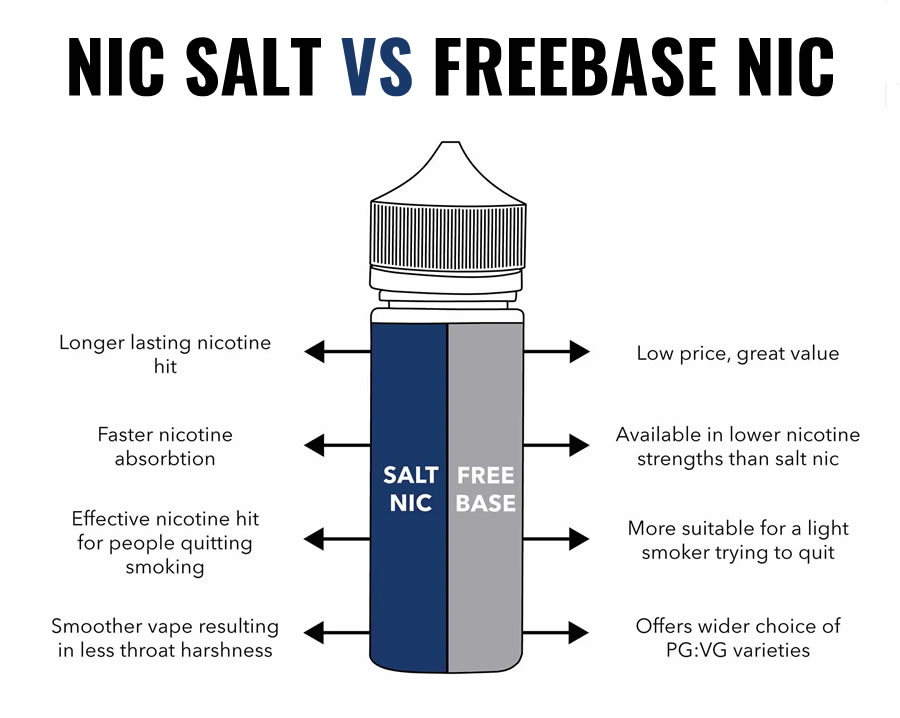 Nicotine salt is the chemical in its organic state that is optimized by Benzoic Acid. Because of this, the body absorbs nicotine salts at a balanced rate. This gives nic salts the distinct smoothness that is less harsh on the throat than the freebase nicotine.

Freebase nicotine is the chemical in its purest form, which gives e-liquids a stronger throat hit than nic salts. It causes the body to absorb nicotine at a more rapid rate since. This type of vaping ejuice is most suitable for sub-ohming, which involves bolder flavours and much bigger puff clouds.

Because of its mellowness, nic salts are often consumed in higher concentrations. Pod-based vape devices like vape pens are the most common e-cigs for nic salt, which with a lower power comsume.

The purity of nicotine in freebase is the reason why they are in low concentrations. High-powered devices are most suitable for freebase ejuices. Those are the vapes that look like big power banks.

The benefits of nic salts are obvious. They last a long time, work as a great transition from smoking to vaping, and give you a faster nicotine fix. This faster nicotine fix means you will vape less, and nicotine salts, vape starter kits, and pod devices create smaller clouds of smoke than other e-liquids and vape kits.

But as with any new development there are both positives and negatives to consider. Here is a quick run-down of the benefits and downsides of nicotine salt e-juice.

Is Nicotine Salt E-Liquid Right for you?

The only remaining question is whether nicotine salt e-liquid is worth trying out for you. This is really a decision only you can make, but if you think about what’s important for you in your vaping experience, you can work out whether it’s worthwhile.  If any of the following statements apply to you, then nicotine salts would be a suitable choice:

The truth is, nicotine salts aren’t a massive game-changing innovation, but for some vapers and some types of device, they do offer benefits. If these benefits match up well with what you’re looking for from your vaping experience, they’re definitely worth trying out. But if you have an ordinary vape mod and get enough nicotine from your device, there is little motivation to switch to a salt-friendly setup.

Nicotine salts are the newest trend in vaping. Many popular brands now have their own versions of nic salts, and they come in a variety of flavors. If you’re trying to transition from smoking to vaping, want a better nicotine hit, or just a better taste from vaping, try nicotine salts today.

How to Choose the Best Pod Vape Kits?