WHAT ARE THE DIFFERENT TYPES OF VAPORIZERS?

Vaporizers come in a wide variety of sizes and shapes, to match the lifestyle of an equally diverse user base. Some models have an external heating element, and utilize a ‘whip’ delivery mechanism whereas others use internal heating and transfer hot air through/over the herbs, through a rechargeable battery (i.e. pen-style or portable vape) or a fan (i.e. forced-air vaporizers). In short, there is a vaporizer to match your personal taste and needs, whether you like to relax at home or stay medicated on the go. 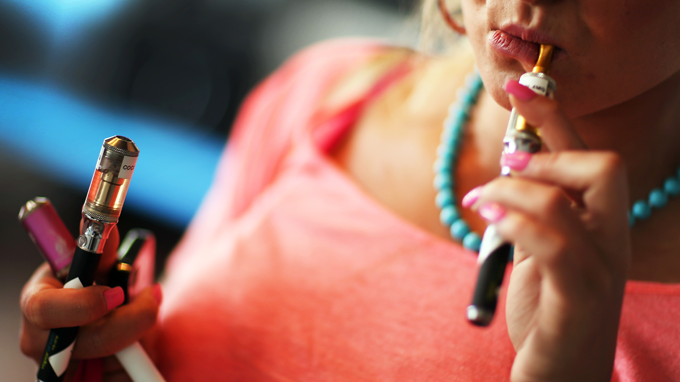 These are large vaporizers sporting a ‘towering’ style that are meant for use at home. The get their name from the fan they have inside, to force air currents through the heating chamber, over the weeds and into either a whip (direct inhalation) or a balloon bag.

This is another tabletop variety of vaporizer that draws power from an outlet. It sets up convection currents by means of a nichrome heating element held inside a small box shell. These vaporizers place the weed inside a ‘wand’, so that it gently rests over the heating element – that gets very hot. They are popular because of their convenience; patients can control the strength of the hit they get by varying their breathing.

The aggressiveness of the inhalation directly affects the air that is pulled over the weed present in the wand. They are considered great for starters since they don’t take long to heat up and also let you see how much weed you have consumed.

These are vaporizers designed for convenient mobile usage. In contrast to whip-style and forced-air vaporizers that are pretty much the same in looks and construction. These portable devices come in a several different styles, and you can judge and choose the best for you, from the best portable vaporizer reviews.

There are those that have internally placed batteries that require recharging from a car charger or AC source, and there are those, which can be turned on through a push-in battery.

A subtype of portable vaporizers, these are used mainly for heating marijuana concentrates e.g. waxes or essential oils. They boast incredible stealth and can easily be transported because they look just like e-cigarettes or pens. These devices employ conduction currents since their heating elements, also known as atomizers, are coils that heat the material through direct contact.

They work by screwing the heating chamber inside the rechargeable battery and are started by pressing a small button located on their side. Although several manufacturers claim that they have the best pen vaporizers for vaporizing weeds, these are largely exaggerations since they will combust instead of vaporize your herb (conduction supplies heat much quicker than convection); so you’ll get more ash when you inhale than you will the active ingredient.

Shortly put, pen vapes are recommended only for vaporizing concentrates – not the whole weed itself.

These are devices that work with liquid concentrates, for instance, butane hash oil, also known as BHO. These vaporizers sport either a clearomizer, a cartomizer, or a concentrate chamber that can be replaced. A cartomizer is vape pen attachment that combines the heating coil (atomizer) and the cartridge into a single unit.

They contain a filler material that resembles the filler you might find in a normal atomizer cartridge. On the other hand, a clearomizer is a cartridge that doesn’t contain any filler material at all. They incorporate a metallic tube, which extends up the body’s middle. In some clearomizers, the heating coil is fixed to the tube’s top, whilst in others, it is placed at the bottom.

In either case, a wick of fiber extends from the coil and soaks in the liquid concentrate, carrying it to the coil. To fill up a clearomizer, the top tip has to be taken off and replaced before any inhalation can be done. Occasionally, you may come across certain best vapor pens that, although original made for herbs, will allow for a replaceable concentrate chamber.

There are also oil vaporizers, which can double as effective wax vapes. Actually, the majority of vaporizer pens are made to be completely compatible with either form of weed concentrate. As mentioned before, certain vape pens are touted to work with herbs, as well as herb concentrate – doing this isn’t recommended though since it is far from ideal to ‘mix the streams’ as it is said.

If you are hell bent on using just one device for all three forms, then be sure to use separate liquid and dry chambers.

Another type of best handheld vaporizers are wax vaporizers. These are made to work with solid concentrates e.g. ‘shatter’, ‘errl’ or ‘budder.’ Just like oil vaporizers, wax vaporizers run on a rechargeable battery which heats the clearomizer / cartomizer.