In 1998, attorneys general from across the nation reached a historic settlement with the tobacco industry to pay for the health care costs associated with smoking. The payouts live on in perpetuity, and will generate $206 billion through 2025 alone. 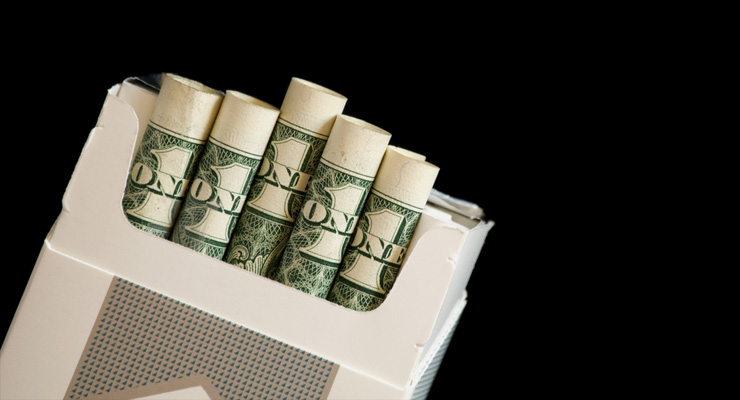 Wall Street came calling with an opportunity for cash-strapped states to get their money up front instead of waiting: tobacco bonds. States could have their cash now if they agreed to pay back the bonds with the tobacco settlement money that was due to them over time.

The only problem is, with compounding interest, these states must pay pack about $64 billion against only $3 billion that was advanced.

As part of the settlement, the payments that Big Tobacco must make to the states are adjusted according to cigarette sales and other factors. While tobacco companies are still making sizable payments, it is no secret that vaping continues to make a dent in tobacco sales.

Due to this financial uncertainty, Standard & Poor’s, a major credit rating agency, has capped Big Tobacco’s max credit rating at “A”, which is two tiers below it’s default max “AAA” rating. Because of this ratings cap, tobacco bonds must carry a higher interest rate to compensate bond investors for their perceived risk.

For the states, every dollar they pay back to these bonds, less and less gets applied to the principal as interest rates go up. Meanwhile, as time goes on, more and more money is due. Some states have already reached the point of critical mass, where they are paying back as much or more bond money than they are taking in from the settlement payments with Big Tobacco.

Who brokered these tobacco bond deals? High powered executives from Bear Stearns and Lehman Brothers, both having since filed for bankruptcy in the midst of scandal, but not before raking in over $500 million in fees for these bonds. Investment bankers, lawyers, and financial consultants continue to add to that figure as states look for ways to straighten out this mess and no doubt try to squeeze even more up front money out of their existing deals.

Dave Dobbins, an executive with the American Legacy Foundation, a nonprofit created under the settlement to fund smoking prevention programs said:

The securitization scheme not only accelerated the expiration of the usefulness of that money, but basically guaranteed that it would never be used for its conceived purpose.

That money was supposed to be used to fund anti-smoking programs and health care, and now it’s gone.

The map below shows the percentage of annual tobacco settlement payments committed to repay investors who own tobacco bonds outstanding as of 2014: 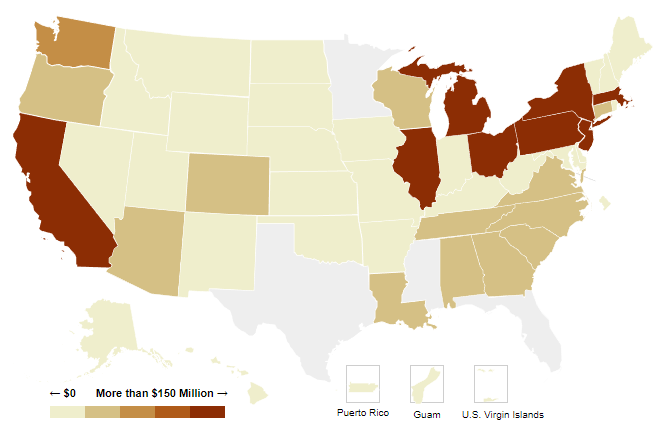 States who pawned their tobacco settlements to Wall Street need a replacement revenue stream, and have set their sights on the booming e-cig industry.

Where did the tobacco bond money go? Ohio used it to build schools and cover tax cuts for the elderly. New Jersey burned through theirs in two years by using it to patch gaping holes in the state’s budget.

California, Illinois, Ohio, and New York have all made recent headlines for pushing strong anti-vaping legislation. The connection between these battleground vaping states and tobacco bonds cannot be ignored.

Every state government seeks to line its pockets with tax revenue, regardless of whether or not they owe tobacco bond payments. But for the states who desperately owe more than they can repay, regulating and taxing the e-cig industry is becoming a top priority.

Vaping is perhaps the greatest weapon against smoking, which is the leading cause of preventable death among Americans. Yet, politicians hide behind the guise of public health concerns over e-cigs while at the same time, using Big Tobacco money slated for health care to fund other non-health related projects and budget shortfalls.

What Is Mouth To Lung Vaping?